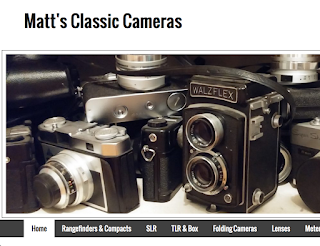 It's online! Matt's Classic Cameras site has been rebuilt and is better than ever!

What's not done yet: sample image galleries are coming soon - I'm splitting this into one gallery per camera section instead of having them all on one big page. I'm also still fixing dead links, as many of the sites I used to refer to have sadly fallen off the web entirely. However, there are new ones to take many of their places, I just have to gather them and update pages.

Once this is done, I will be adding in the pages that never quite got finished, including:

If you find anything really broken or weird let me know. Also, let me know if you miss having the list of thumbnails and descriptions on the camera pages themselves, I'm on the fence about that. 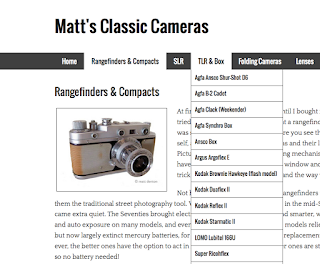 It's officially in progress, and I mean actually really and truly in progress, the updated Matt's Classic Cameras site that I've been kicking around for years!

It's about half migrated now, after only a few days of work, and after several years of false starts and dead ends, trying to develop a custom theme for Wordpress, then learning Drupal theming and administration, and in the end, when I was ready for it and it for me, finding a Wordpress theme that was just right at the time I needed it most and just diving in with both feet.

Slick, clean, modern, and responsive, basically everything I've wanted in the site since I started looking for a solution. Once it's all ported over from my current static html site, I'll go back through and update broken & missing links and make sure everything works, but won't be changing the site content people have come to know and love. I want this version live as soon as possible.

Bonus - I've found pictures of cameras I forgot I had that I'll be adding to the site, so there will actually be some fresh content for the first time in years. I'm so glad that there has been a resurgence in film camera use and to see that the love for film continues. I hope that I've been a contributing factor in my own little way, that was my intent for this site from the very beginning!

Matt
Posted by Unknown at 7:13 AM No comments: