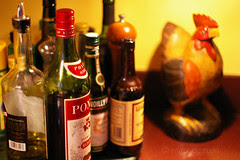 Not my toy exactly -- I recently got to play with a friend's Pentax DSLR and just put a couple of the more interesting snaps I took with it up on flickr. The cool thing about it -- an older *ist and yes, that's the name -- is that it will use just about any K mount lens, meaning not just the latest AF Pentax lens but also my old manual K mount lenses as well! Apparently with an adapter it will even use universal screw-mount lenses too. Hard not to like that selling point!

Note on the pics - the black and white self portrait is with the included zoom, I cropped it, turned it black and white, and added film grain in Photoshop. The other two are with the Sears 1.4 / 50mm that came with my KS2. Note the shallow depth of field in the available kitchen light.

MD
Posted by Unknown at 1:47 PM No comments:

New photo posts on flickr, from a roll I just finished in my Ricoh 500G, what a great little picture taker that is. Lightweight and easy to use, with a really sharp lens and good meter. I think I paid less than $10 for it a few years ago. Half the roll is of the Rock 'n Blues Festival where Sammy Hagar and the Wabos played. Those two pics of Sammy are heavily cropped as a 38mm lens doesn't do justice from where I was standing, but I did get some cool photos of a local band called Weslester who put on a throbbing, headbanging, kick ass live show that the kids were really getting into.

The other half are some fun action photos of my kids shooting hoops at a local school, gearing up for basketball season, I'm still sorting those but will have them up shortly.

I also just finished a roll in the Nikon N2000, I had forgotten what a fun camera that is! Not much bigger than a regular manual SLR but with a pretty fast motordrive. Manual rewind, which took me a few minutes to figure out, I thought with the motor it would rewind itself like the N6006 but not so much. Doh!

So for some reason, getting reacquainted with these old 'friends' got me thinking about how different my life is now from when I first picked up these cameras, and about all the new people I've met since then. I have to say I feel pretty lucky for having the life I do, and to know the amount of great people I do. Thanks to all of you for keeping the flame alive, keep on writing and keep on shooting!